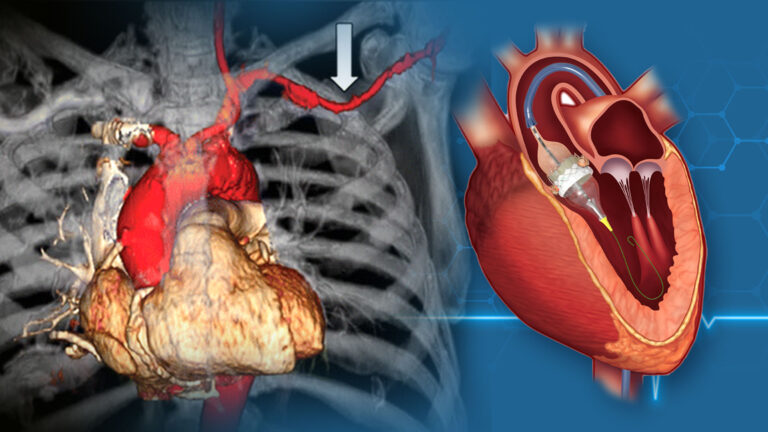 This procedure is primarily used as a treatment method for severe aortic stenosis (AS). In AS, the aortic valve becomes exceptionally narrow, hindering the blood flowing through it to the rest of the body. It can cause chest pain, fatigue, shortness of breath, etc., leading to heart failure or sudden cardiac death.

TAVI is increasingly gaining popularity as the first-line treatment modality for AS compared to the pre-existing conventional treatment, which was surgical aortic valve replacement (SAVR). SAVR involves extensive surgery, with a sternotomy and heart-lung bypass required. The extended surgery time, need for general anesthesia, and post-surgical risks make it a non-viable option in many patients, promoting the less risky and less invasive TAVI approach.

What is the Usual Route Available for TAVI?

The most common approach is the Trans-Femoral (TF) approach2. Here, using either a surgical cutdown or, more recently, a percutaneous approach, a catheter is introduced through the femoral artery up to the aortic valve. Using various insertion methods, the new valve is placed over the damaged valve. This approach is preferred over other alternative routes due to reduced vascular complications, ability to perform under local anesthesia and rapid improvement in available facilities and suitable patients. However, this approach may be contraindicated in patients with severe atherosclerotic disease, tortuosity, calcifications, and angulations of the femoral arteries, and alternative routes must be sought.

The Alternative Routes
Transapical and Transaortic

Transapical (TA) was considered the next viable option. It requires general anesthesia, a mini-thoracotomy, and a direct puncture of the left ventricular apex. It uses an anterograde approach, compared to all the other routes, which work retrograde. It allows for easy valve crossing and excellent control of valve position during implantation. However, it could also lead to reduced left ventricular function or myocardial stunning, and its use is now reducing.

Transaortic (Tao) also uses access via a mini-thoracotomy and general anesthesia. It cannot be used in patients with a calcified or atheromatous ascending aorta and anatomical variations like pectus excavatum. Both these methods are not thought to be as safe and effective as Trans-femoral, but no randomized trial has been conducted yet.

Trans-subclavian is usually performed through a surgical cutdown of the left subclavian artery after its isolation by a vascular surgeon. The Seldinger technique is used to obtain access, but recently percutaneous methods are on the rise. The rate of success of the surgery is very high, and post-op complications are less. Trans-axillary, too, uses the subclavian artery to access the aortic valve.

The trans-carotid approach is another alternative when the femoral and aortic pathologies are present. The carotid artery is approached supra-clavicularly, and it offers the benefit of avoiding a sternotomy or thoracotomy, which is advantageous in patients with respiratory comorbidities. Studies conducted thus far show positive results.

Trans-caval is the newest route to be explored. Access is obtained percutaneously via the femoral vein, and the catheter is made to cross over to the abdominal aorta from the inferior vena cava. It avoids the complications of transthoracic approaches, but it is essential to exclude any other arteries or calcifications in the area of crossing over. This approach is not widely used yet due to its complex nature and is reserved for experienced specialist centers.

How to Choose the Correct Approach?

It is of paramount importance to properly image the artery of choice for access and to confirm that the diameter is adequate and that there are no calcifications or tortuous vessels which may impede the procedure. MDCT plays an invaluable role here. The route should be chosen to avoid vascular access site complications, which are the commonest problems encountered2.

If you are thinking of getting a TAVI done and from around Mumbai, don’t hesitate to contact the office of Dr. Ankur Phatarpekar, one of the most experienced and best cardiologists in Mumbai. Our heart specialist center will take excellent care of your needs and conduct all required tests to ensure the best approach tailored to your condition.